Rating agency Standard and Poor’s (S&P) expects the weak assets of Indian banks to shoot up to 13-14 per cent of gross loans by March 2021 as heightened economic risks are set to affect their asset quality and financial performance. Its forecast is higher than the peak of 11.6 per cent witnessed in fiscal year 2018, and about 8.5 per cent estimated as on March 31, 2020.

The credit costs, which banks have to set aside as provision for bad loans, are likely to rise to about 3.7 per cent of gross loans from 2.9 per cent estimated for March 31, 2020.


The tough operating conditions could lead to a rise in non-performing loans (NPLs) and credit costs. It may also result in delay in recoveries for the banking system.

The rating agency revised the banking industry country risk assessment (BICRA) for India to group ‘6’ from group ‘5’. It assessed the economic risk trend as stable.

It said, “Moreover, we anticipate the resolution of weak assets will be delayed until at least fiscal 2022 (March 2022). Consequently, banks will likely be saddled with a large stock of weak loans in fiscal 2022 too. We have assumed only about 100 basis points (bps) improvement in NPLs.” 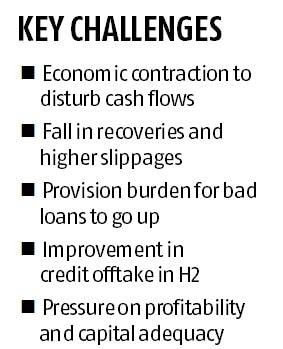 The steps taken by the government and the Reserve Bank of India should provide some respite by delaying recognition of some of the weaker loans, it added.

On Friday, the rating agency downgraded the issuer rating of private lender Axis Bank from ‘BBB-’ to ‘BB+’.

It placed public sector lender Indian Bank (BBB-) on credit watch with negative implications. The public sector bank’s credit profile could weaken over the coming quarters due to Covid-19 as well as the merger with the weaker Allahabad Bank. It also affirmed ratings on seven other Indian banks.

S&P said the economic conditions have turned adverse for Indian banks due to the outbreak. Drastic efforts to curtail the spread of coronavirus have resulted in a sharp economic contraction.

The government’s stimulus package, with a headline amount of 10 per cent of gross domestic product (GDP), has about 1.2 per cent of direct stimulus measures. The share of direct stimulus is low relative to countries with similar economic impacts from the pandemic. The remaining 8.8 per cent of the package includes liquidity support measures and credit guarantees that will not directly support growth. “We now forecast a five per cent contraction in the economy in fiscal 2021,” said S&P.